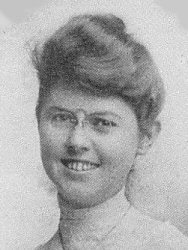 Edythe Squier Draper was born of missionary parents on July 25, 1882, in Hakodate, Japan. When she was five, her family moved from Japan to Ohio, then later to Minnesota. As the eldest of nine children (only seven survived to adulthood), the young Edythe had many responsibilities, often having to wash clothes and dishes and care for her siblings. Her childhood was not easy. She wrote later:

When I was fourteen my father - in Sinclair Lewis' old town, Sauk Centre, Minnesota - forsook the church and all her works. He wrote a book and we lived on - dreams, my mother and we were seven. My father took to insurance and we had a little food and some shoes.

Edythe often felt like an outsider, as the family moved constantly. In her autobiographical story "The Fruit at Singapore," she writes:

If in this town she said hain't and darsn't in just the right places she might be chosen for Run Sheep Run, and the girls might put their arms around her and the boys make faces at her. No, it was no good knowing Japanese. You must not say things, know things, the others didn't. You must be like the girls in any town you were in, if you wanted not to be alone all the time.

By the time Edythe graduated from high school she had lived in Browns Valley, Crookston and Sauk Centre, Minnesota; Steubenville and Westerville, Ohio; Asbury Park, New Jersey; and Greensburg, Pennsylvania.

After teaching at a mission school for black students in South Carolina, attending the University of Pennsylvania for a time, and teaching high school in Ohio, Edythe Squier Draper came to Oswego, Kansas, in 1910 to join the faculty of the Oswego College for Young Ladies. She stayed in Kansas the rest of her life. In 1912, she married James B. Draper, whom she described as "the Man Across the Street," then had three children and began to write. Between 1924 and 1942 she published over two dozen stories, around 60 children's stories, and newspaper fictional short stories. Her best short story, "The Voice of the Turtle," was reprinted in Edward J. O'Brien's The Best Short Stories of 1930. In 1942, when almost sixty years old, she became the Oswego correspondent to the Parsons Sun. She wrote a daily column for the Parsons, Kansas, newspaper until her death at age 82 on September 25, 1964.

Although Edythe Squier Draper never published her novel, and gave up writing short stories to become the Oswego correspondent to the Parsons Sun, she saw significant publication of her short stories in literary journals between 1924 and 1942. Here are some of those:

Edythe Squier Draper See all items with this value 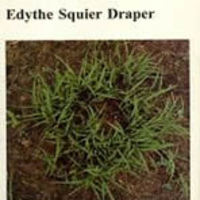 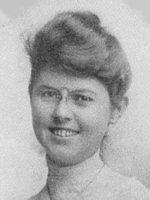