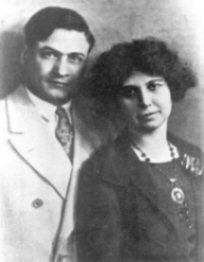 Mr and Mrs. Haldeman-Julius were a couple who shared equally in the writing and publication of many essays, short stories, newspaper publications, and even a few short novels. They lived during an era of great social enlightenment that succedeed the Communist Revolution in Russia and The Great War. This era was the first in history to include women on equal ground.

E. Haldeman-Julius was born in Philadelphia to Jewish immigrant parents from Odessa, Russia. Emanuel Julius joined the Socialist Party as a teenager. Although not formally educated, he nonetheless became a successful writer for the leading Socialist newspapers in New York, Milwaukee, Chicago, and Los Angeles. However, he left these cities for the small town of Girard, Kansas, population 3000, to become an editor of his own publication, The Appeal To Reason. While in Girard, perhaps the most important thing happened in his life when he met and fell in love with a young and beautiful Marcet, age 28. Although they met in Girard, both had experienced the cosmopolitan and cultural life of Greenwich Villlage in New York City. Marcet grew up the daughter of a well-to-do Republican Presbyterian banker in Girard and was able to sample far off places, exotic cultures, and many intellectual pursuits. Both Marcet and Emanuel, yearning for the culture of Greenwich village, nonetheless settled down in Girard and published works by many famous authors through their "Little Blue Books" at the Haldeman-Julius Press. Emanuel and Marcet worked jointly and were equal partners in their pursuits, publishing works together and independently, as well as the works of many unknown authors in their "Little Blue Books." TheLittle Blue Books, the first mass market paperbacks in the United States, were not necessarily blue, but used cheap pulp paper in order to lower the cost and make books available to poor and rich alike.

They were both devout Communist and Atheists and traveled to the Soviet Union to explore the great Bolshevik social experiement in Russia. Socialism seemed to be the driving force behind many of the Haldeman-Julius's works including their authorship of a Socialist periodical, The Appeal to Reason.

Very soon the Haldeman-Juliuses found themselves in the company of a wide range of famous authors of the time, such as: Upton Sinclair, Clarence Darrow, Will Durant, E. W. Howe, and Alfred Kreymborg. These famous visits to their farm near Girard was chronicled in a Little Blue Book, Famous and Intersting Guests of a Kansas Farm, by Marcet Haldeman-Julius.

The two divorced in 1931 but continued to live together at their farm in Girard. Marcet died in 1941 and Emanuel remarried a year later. Emanuel died only 11 years later in 1952 in a drowning accident. Their press, by the time of his death, had published over 500 million books. The Haldeman-Juliuses will always be remembered for their views of a new and better world, their commitment to little-known authors, and their dissemination of cheap books so millions of people could have access to great literary works.

Emanuel and Marcet Haldeman-Julius See all items with this value 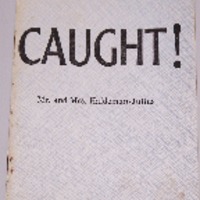 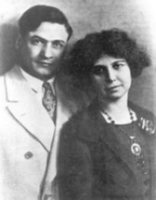