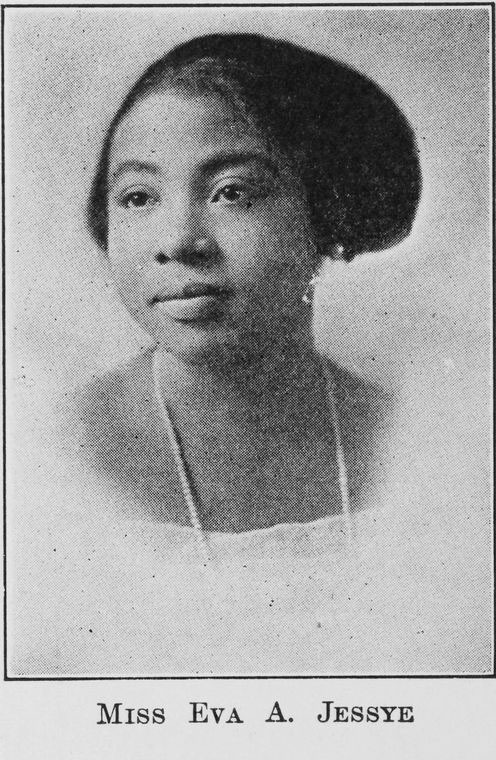 On January 20, 1895, Eva Jessye was born in Coffeyville, Kansas. Her parents separated when she was three years old. She was sent to live with her grandmothers and aunts while her mother worked in Seattle. She lived with her Aunt May Buckner Knight in Coffeyville. She spent her summers with her Great Aunt Harriet near Caney, Kansas, because her other relatives went to pick cotton in the Indian Territory. After the evening chores were done, her Great Aunt Harriet would sing the most beautiful spirituals to her. Her aunt had an amazing voice that fostered Jessye’s deep appreciation for music.

When she was seven years old, Jessye went to live with her mother in Seattle. It was there that her love of poetry was born from reading poetry magazines given to her by a railroad porter. She tried to copy the styles and wrote her first poem, "To the Virgin Mary." She also wrote a poem, " The Nativity,"when she was only seven years old. Jessye spent a year or two with her Aunt Pauline Walker in Iola, Kansas. She attended the Touissant L’Ouverture School while she lived with her Aunt Laura Denny in St Louis, Missouri.

When Jessye was nine years old, she had a life-changing vision while recovering from typhoid fever at her Great Grandmother Buckner’s home. She said the vision helped her understand that humanity is of higher importance than intellect. Jessye said she kept this awareness all of her life (Little Balkans Review, Summer 1981, Vol. 1, No. 4).

When she was thirteen years old, her mother sent her to Western University in Quindaro, a part of Kansas City, Kansas. The university ignored the minimum enrollment age to admit Jessye a year earlier than normal because African Americans were still barred from attending the public schools in Coffeyville. The university’s music instructor, R. G. Jackson, let Jessye take charge of the University chorus because of her musical abilities.

In 1914, Jessye traveled to Fort Scott, Kansas when she entered the James A. Handy Literary Society contest. At the last minute she changed her category because she felt she couldn’t compete with D. Mae Buxton, an experienced dramatic reader. Buxton won the declamation category and Jessye’s poem, "Negroes Are Bound to Rise," won first prize in a new category, original poetry. In a Little Balkans Review interview with Gladys Mundt, she said, “…I compared our race to a lazy river full of power, but without current. (I was militant even then in my own way).” Jessye studied music theory and choral music at Western University where she earned her degree later the same year. It took her three summers to earn her life certificate in teaching at Langston University.

In 1927, Eva Jessye was in terrible straits. She worked feverishly from her run-down apartment to finish her book. It only took three weeks for her to compile and publish, My Spirituals, her critically acclaimed collection of songs from Southeast Kansas.

In 1935, Jessye became the original choral conductor of George Gershwin’s Porgy and Bess, a new folk opera about Porgy, a crippled black man who lives in Charleston’s slums in South Carolina. Porgy tries to free Bess from her drug-dealing pimp’s grip. Eva Jessye's unique musical insight enhanced the cultural texture of the work. Over the next thirty years, she was involved in almost every worldwide production of the Porgy and Bess opera. She has been dubbed its unofficial curator and guardian.

In 1963, Jessye was involved with the civil rights movement. Martin Luther King, Jr., chose the Eva Jessye Choir as official chorus of the historic March on Washington.

In 1972, Eva Jessye directed her own composition, Paradise Lost and Regained, her original folk oratorio which was hailed by the  Washington Post.

In 1974, the Eva Jessye Collection of Afro-American Music was established by Jessye at the University of Michigan in Ann Arbor. In 1976, Jessye was awarded a Degree in Determination by the Afro-American Studies Department at the university.

In 1977, the Eva Jessye Collection was established at Pittsburg State University in Kansas. It includes her biographical information, writing, clippings, photographs, programs, recordings, and other information about the singer’s life and career.

In 1979, Jessye returned to Pittsburg State University as an Artist-In-Residence. Jessye remained in Pittsburg, Kansas, until sometime in 1981.

In 1984, Dr. Eva Jessye made a profound statement during an interview with Jacob U. Gordon about the drawbacks of being black and elderly in Kansas. She said, "I often think if I had been white, where would I have been? Perhaps not anywhere. Because I think I had it made, you know. Who's that who said he took the path less traveled by? Robert Frost? I took the color less desirable and it made all the difference."
Source: http://library.pittstate.edu/spcoll/ndxjessye.html.

In 1987, Jessye received an honorary degree as Doctor of Art from Eastern Michigan University at the age of 92. Later, she wrote about the experience. “You see I am still cuttin’ cane and choppin’ cotton-with might and main-with wide acclaim!”

Eva Jessye has an entry in the African American Registry.

Eva Jessye continued to write throughout her life. According to Randy Roberts, curator of Special Collections at Pittsburg State University’s Axe Library, Eva Jessye had begun writing her autobiography but she had not completed it at the time of her death.

On February 21, 1992, Eva Jessye passed away leaving behind the legacy of her literary wisdom and her sensitivity toward humanity.

Eva Jessye See all items with this value