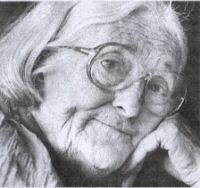 Meridel Le Sueur was born February 22, 1900, in the small town of Murrary, Iowa. When Meridel was ten years old her mother, Marian Wharton, left her father, William Winston Wharton, an itinerant Church of Christ minister, taking Meridel and her younger brothers Mac and Willam Winston II with her. Meridel spent the next years in Perry, Oklahoma, at the home of her grandmother, Mary Antoinette Lucy, a third-generation Puritan, a pioneer and an ardent temperance worker. A feminist socialist, Marian earned her living by traveling the Chautauqua circuit and lecturing on women's issues, including education, suffrage, and birth control. In 1914 the family moved to Fort Scott, Kansas, where Marian headed the English department at People's College. There she met and married Arthur LeSueur, a lawyer and committed socialist, formerly mayor of Minot, North Dakota. After anti-socialist vigilantes destroyed the college during WWI, the family fled to St Paul, Minnesota, where they worked with the Non Partisan League and were hosts to meetings of Wobblies, anarchists, socialists, and union organizers.

After a year studying dance and physical fitness at the American College of Physical Education in Chicago, Illinois, Meridel moved to New York City, where she lived in an anarchist commune with Emma Goldman and studied at the American Acadamy of Dramatic Art. Her brief acting career included work on the New York stage and in Hollywood, where she was a stunt woman and an extra in films such asThe Perils of Pauline and Last of the Mohicans. Fed up with the Hollywood meat market, LeSueur decided to concentrate on her writing, which she had pursued faithfully since her late teens. By 1924 she had joined the communist Party and she soon began publishing in labor and left wing journals such as The Worker and New Masses. Her writing career took off in May 1927 when her short story, "Persephone," was published inDial. LeSueur became known for her stories, essays and reportage focusing on the suffering of the working class, mainly women, and her distinctive, lyrical style, which set her apart from most of the socialist writers of the day.

Le Sueur continued to publish prolifically throughout the late 1920s and up until the end of WWII, when the onset of the cold war brought with it the blacklisting and harassment of those involved in the socialist movement. During the height of the "red scare," Le Sueur made her living publishing children's books, tecahing writing, and holding a variety of odd jobs. In the 1960s she traveled around the country, participating in campus protests and interviewing people, listening to their stories and struggles.

The freer political climate and the burgeoning feminist movement of the 1970s brought new attention to Le Sueur and her work. Le Sueur maintainted an extensive correspondence with writers, artists, and activists, many of whom were drawn to her dedication to liberal political, economic, and environmental causes. During the period from the late 1970s through the 1990s, she published a number of anthologies and stories, including many written during the 1930s but rejected for publication at that time. Several of her works, including The Girl, Annunciation, and The Dread Road were adapted for the stage by other writers. Le Sueur continued to write and give interviews, readings, and talks around the country until her death in November, 1996.

Meridel Le Sueur See all items with this value 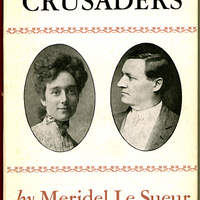 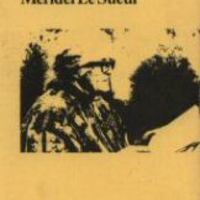 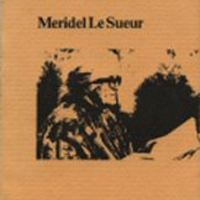